Australia is a country of fire. Our synonymic relationship with burning extends across a vast register, deeply influencing our culture, society, politics, economics, and ecology. Octopus 21: On Fire is an iterative component of a broader project: On Fire: Climate and Crisis, first presented at the Institute of Modern Art (IMA), Brisbane in early 2021. This project focuses on interpreting a tangible shift in our relationship with this element in an era of dramatic global warming. Through the work of ten contemporary Queensland artists—a mixture of emerging, established, and posthumous voices—Octopus 21: On Fire examines fire’s presence in the north-eastern state’s environment.

The subtropics and fire’s conflation here may initially seem unexpected – especially in the context of Victoria’s more extensive and distressing history of bushfires. Unlike broader Australia, Queensland is not frequently associated with its flammability. Certainly, the state’s climate is equated with heat—primarily, its languid humidity—but its extreme weather is largely dominated by the climatic phenomena of cyclones, floods, and droughts. The contention of On Fire is that the increasing presence of fire within Queensland reflects a new and precarious reality. (1) And that this is evidence of the increasing, tangible impact of global warming on our local ecology. On Fire presents this argument in the shadow of Australia’s worst fire season to date: 2019-20’s Black Summer—an event undoubtedly exacerbated by a dramatically warming planet—and does so roughly one year after the season’s unprecedented burning subsided.

Last fire season, the Gold Coast hinterland was the site of an early and significant blaze. This is a particularly relevant event for this project because of its geographical proximity and symbolic associations with catastrophe, but more pressingly because of where this conflagration took place: the rainforest, an environment that should never burn. (2) This event connects Queensland with the emergence globally of the climate-fuelled ‘mega-fire’ and fire’s presence in increasingly contradictory and uncanny scenes. (3) Fire historian Stephen Pyne identifies Australia as the frontier of a new era of fire. (4) To begin to make sense of these new conditions, we must interrogate how scenes of such destruction inure themselves to us, challenge their normalisation, and—importantly for this exhibition’s purpose—utilise visual culture and art’s capacity to, as Chari Larsson describes, (5) make change visible.

This essay introduces and situates the project as a whole within two important discourses and a broader foregrounding in the ongoing context of colonisation. The first discourse is defined by Pyne’s recent scholarship around the Pyrocene—‘the idea that humanity’s cumulative fire practices are fashioning the fire equivalent of an ice age’. (6) Beyond the more popular framing of our current geological age as the Anthropocene, which is increasingly mainstream but also widely critiqued, (7) Pyne’s argument reflects fire as one of the more visible results of global warming in its speed, ferocity, and scale, and predicts its increasing regularity as the climate continues to boil. It also acknowledges the deep and negative influence of extractivism on this process.

The second of these discourses is the cultural burning movement within Australia, which offers a site of optimism in response to Pyne’s Pyrocene. This movement—building on millennia of First Nations cultural fire knowledge that is part of a broader and constantly evolving cultural continuum—has gained wider attention in recent years by the writings of Yuin, Bunurong and Tasmanian author Bruce Pascoe and Queensland’s own Victor Steffensen, a descendant of the Tagalaka people of the Gulf country in the state’s far north. Steffensen’s Fire Country describes in direct and personal detail his work as a leading fire practitioner. An advocate of ‘good fire’ guided by ancestral Indigenous knowledge of Country and fire’s behaviour within Australian environments, Steffensen describes the element’s rejuvenating function for the country’s ecology and its mitigation of the risk of ‘bad fire’. Bad fire reflects unregulated and increasingly uncontrollable bushfires like Black Summer: ‘mega’ blazes fuelled by global warming and ongoing colonial settler disconnection from the landscape. (8) This disconnection, which Steffensen discusses closely, is reflected in the application of various imported fire practices informed by European knowledge—framed by damaging, anthropocentric beliefs. Art plays a critical role in helping us to comprehend the complexity of global warming: but also importantly, ways to visualise it to enable fuller engagement.

Art in an emergency

The works presented in On Fire evidence the differing articulation of fire’s importance in critical and informative ways. Artist D Harding, a descendant of the Garingbal, Ghungalu, and Bidjara peoples of Central Queensland, introduces viewers to this through their video work Moreton Bay Ash branch smoulders slowly (2020), a meditative study of the burning of the titular tree, known also as Corymbia/Eucalyptus tessellaris, a type of eucalypt found in northern New South Wales, but more commonly from the eastern half of Queensland and up into the tip of Cape York.

Filmed with an intimate proximity, the cross-section of charred timber glows internally with the flame’s life, its heat pulsing through the wood. At times, plumes of grey smoke drift across the lens. Reflecting abstractly on fire’s environmental and social stories within cultural landscapes, Harding’s work communicates a sense of the element’s deep innateness to this place and biome—a quality frequently marginalised in colonial misrepresentations.

This plurality of understanding is echoed in the subject’s many articulations across both European and indigenous languages shown in the work’s lower half. Presented in close proximity to Bennett’s work is Bush Fire Burning at Kuchendoopen (2015), a large-scale painting by the Putch Elder and cultural leader of the Wik and Kugu people, the late Mavis Ngallametta (1932-2019). The vast canvas is from Ngallametta’s majestic series of bushfire works. The painting depicts a blaze on Country seen from Ngallametta’s distinctive viewpoint. The landscape rises up and down, enveloping our vision in a celebration of place, and invoking the deep knowledge that the artist, her family, and Traditional Owners more broadly hold of Country and fire’s rhythms and behaviours. This extends to the materials Ngallametta often painted with: natural ochres, but also more pointedly charcoals, seared by the landscape’s burning – imbuing in the work and an evocation of good fire’s purpose. The attempted suppression of these knowledges by the settler state place great risk on these already precarious environmental systems.

As this project more broadly recognises, and as Steffensen attests, ‘there is no doubt that the devastation we see cast across the Australian landscape today has developed since colonisation.’ We live today in a climate and place deeply affected by the dispossession wrought by James Cook and the British Empire: the product of Australia’s ‘birth’ at the same time as fossil-fuelled capitalism. (9) This point importantly acknowledges a divergent visibility of fire within this project that is different to the very visible burning of landscapes such as those of Black Summer discussed earlier: the less visual combustion, the burning of fossilised landscapes within the engines of industry, and the latter’s direct fuelling of the former. The colonial invasion of this country by the British—precipitated by Cook’s 1770 claiming of the continent’s east coast for the Crown, just off the coast of Far North Queensland—happened just six years prior to the invention of the Watt commercial steam engine. This device, according to Naomi Klein, ‘massively accelerated the Industrial Revolution ... powered by a potent combination of slave labor in the colonies and coal fed into those ... engines’. (10) In the original presentation of Judy Watson’s australian mean temperature anomaly (2021) a large sample of sedimentary coal accompanied Watson’s large canvas – conflating pointedly the dramatically rising mercury across the second half of the 20th century, depicted in the work’s graphs, with the burning of fossil fuels. This nation’s embedded conception among colonialism, slavery, coal, and capitalism plays a significant role in the climate fires of last summer and the near future. Australia’s extractivism, in particular, continues unabated. (11)

Looking to the implications on political and cultural landscapes further, Kamilaroi artist Warraba Weatherall’s work To Know and Possess (2021) provides an examination of institutional appetites for categorisation and control. Replicating the actual index cards that record Kamilaroi cultural objects within museum collections as bronze memorial plaques, Weatherall focuses our minds on the death of active knowledge that the archive wields for cultures and communities for whom these objects play ongoing and crucial roles.

For Los Angeles and Brisbane based artist and Palawa woman Jemima Wyman, these enforced or inherited systems of control naturally generate friction: between the public, restless with inaction and excuses, and the agents of the state, be it military or police. In Haze… (2020-21) the fires of activism give rise to coloured gradations of smoke, categorised by the artist as part of her labourious hand-cut process and documented precisely in the work’s full title. Sublimation printed onto chiffon, the result suggests the rising fume of a bushfire, but each plume is sampled from a flame of protest or that action’s response from the powers that be in the form of smoke grenades or flash grenades. The result creates a panorama of protest and resistance.

The final works of this exhibition look to the future of this complex situation. The increasing precarity of our biomes and the aftermath of climate events like Black Summer inspire Lecanomancy (2021) an installation by Naomi Blacklock that recalls scenes of destruction from the devastating fires. Represented in this iteration by performance documentation of Blacklock playing a water phone, the artist gazes into a pool of dark water, surrounded by a funerary-like pyre. The work’s title alludes to a method of divination where a small stone’s disruption of the water’s surface is interpreted for predictions of the future.

Michael Candy’s Azimuth (2021) illustrates one such future, where the ‘innovations’ of techno-capitalism are applied as solutions to the evolving weirdness of 21st century environmental implosion. Conceived as he fled Detroit in the early stages of the COVID-19 pandemic, the robotic sculpture functions like the second hand of a clock, yet its body is formed by UV-C germicidal tubes. As it orbits the gallery space, it demarcates time but also burns alive the bacteria that clings to its surfaces. As organisms, the longer we dwell on this rock seems to throw even more inhospitable conditions at us. Yet we have grown accustomed in a way to these fiascos, as Tracey Moffatt and Gary Hillberg’s Doomed (2007) pronounces. The ends of this fragile thing have been speculated on innumerable times across the history of cinema: and in these fictionalised events’ oddities and absurdities, we find ways to cope or comprehend our finitude as fantasies become realities.

On Fire intends to encourage a reflection too of crisis narratives as an anxious symptom of threats against settler futurity. Such a point must acknowledge First Nations communities especially as having experienced varying forms of destruction and dispossession—of worlds, of environments, of knowledge—at the hands of colonial invasion. To realise only now the fragility of this planet is a particular indulgence born of various privileges and protections. Thus fire, like the settler state, has been framed and upheld in ways that must also be dismantled, in anticipation of better preparing us for our future within the emerging Pyrocene.

This essay is partly adapted from the Introduction to On Fire: Climate and Crisis, ed. Tim Riley Walsh (Brisbane: Institute of Modern Art, 2021), 10–16. 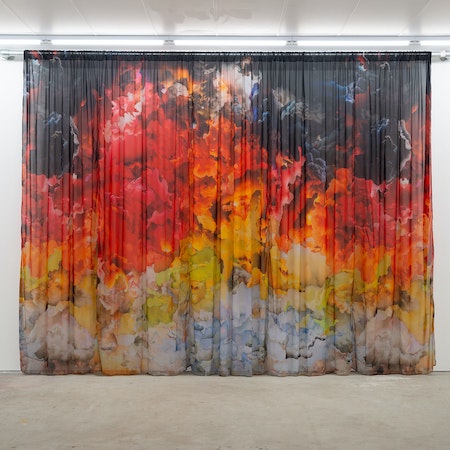