A word floats suspended in the room. Made from a sheer, white cotton cloth and light wooden frame, three-dimensional letters hang in a line from Studio 12’s far wall to read S E L F. On closer inspection we can see a faint etching of the letter H on the far wall of the studio so that the letters also read in reverse F L E S H. Self Flesh (2007) literally spells out Florentina Munteanu’s ongoing interest in the relationships between representation and form, and more specifically between identity and the body.

Munteanu’s small-scale video and installation works, transform everyday objects and language so that their formal and representational qualities are disrupted. A pencil is made out of chocolate or a word out of string. In the video performance apparatus (2007) a pair of stiletto shoes walk about an empty room. The shoes are covered in a thick white pastry-dough baked on so that the flexibility and malleability of the dough, and its associations of domesticity and food, are corrupted by the stiletto’s associations of femininity and fashion - and vice versa. Even the aural qualities of the stilettos tapping on the floor become overwhelmed by the crunching and crackling of the cooked dough.

By presenting objects in these unconventional ways, Munteanu begins the first of a series of material and conceptual mediations. The new object is set in motion as an intimate performance that is in turn videoed. Finally, the video is exhibited in an unusual setting or projected onto an unusual surface, often in reverse or slow motion or both. This strategy can be seen in apparatus and in other works like Corina (2005) where Munteanu drew a flip-book, which she then animated by hand, only to film this act of animation and screen it as a digital video on an LCD screen inserted like a page into a blank book. With each layer of mediation, the performance and the materials accumulate additional meanings and properties so that they become increasingly ambiguous.

As an artist with many possible identities (not least Australian, Romanian, migrant), Munteanu stresses the ambiguity of these different ‘selves’ and the slippage that occurs amongst them. In …couldn’t string a word… (2005), a length of wool string is animated to write different words including ‘austranian’ – potentially a spelling mistake, a playful hybrid of Australian and Romanian, or both. Another work to engage with the poetic ironies of language is the digital video Labrum (2006) in which a mouth repeats the words ‘liking’ and ‘killing’. Playing with the repetition of the consonant and vowel sounds of lik/kil king/ling, Munteanu emphasises the phonetic similarity of these two words with oppositional meanings, thereby indicating the arbitrariness of the relationship between words and their referent.

Self Flesh is the culmination these artistic processes and interests. Munteanu achieves an act of material mediation, transforming the letters S E L F into F L E S H and vice versa, and through this she also articulates the everyday mediation we perform (i.e. transforming the flesh into the self) when constructing an identity. Self Flesh draws our attention to the way these two words almost mirror each other. But where the similarity between ‘liking’ and ‘killing’ is amusing because of how different the meaning of the words are – ‘self’ and ‘flesh’ have a much more complex relationship. Indeed ‘self’ is often used to denote identity as a constructed and representational concept, whereas ‘flesh’ refers to the material, the biological and the visceral. In many ways ‘self’ functions as the word or name for ‘flesh’.

Self Flesh asks at what point does the word stop and the meaning begin, and more specifically, at what point does the self stop and the flesh begin? For Munteanu the two are inseparable. As the installation demonstrates they mirror each other, in all senses of the word. But as hinted by the faintly perceptible letter H, this is a propositional rather than fixed meaning, because, as with all of Munteanu’s works, meaning is as subjective and capricious as language. 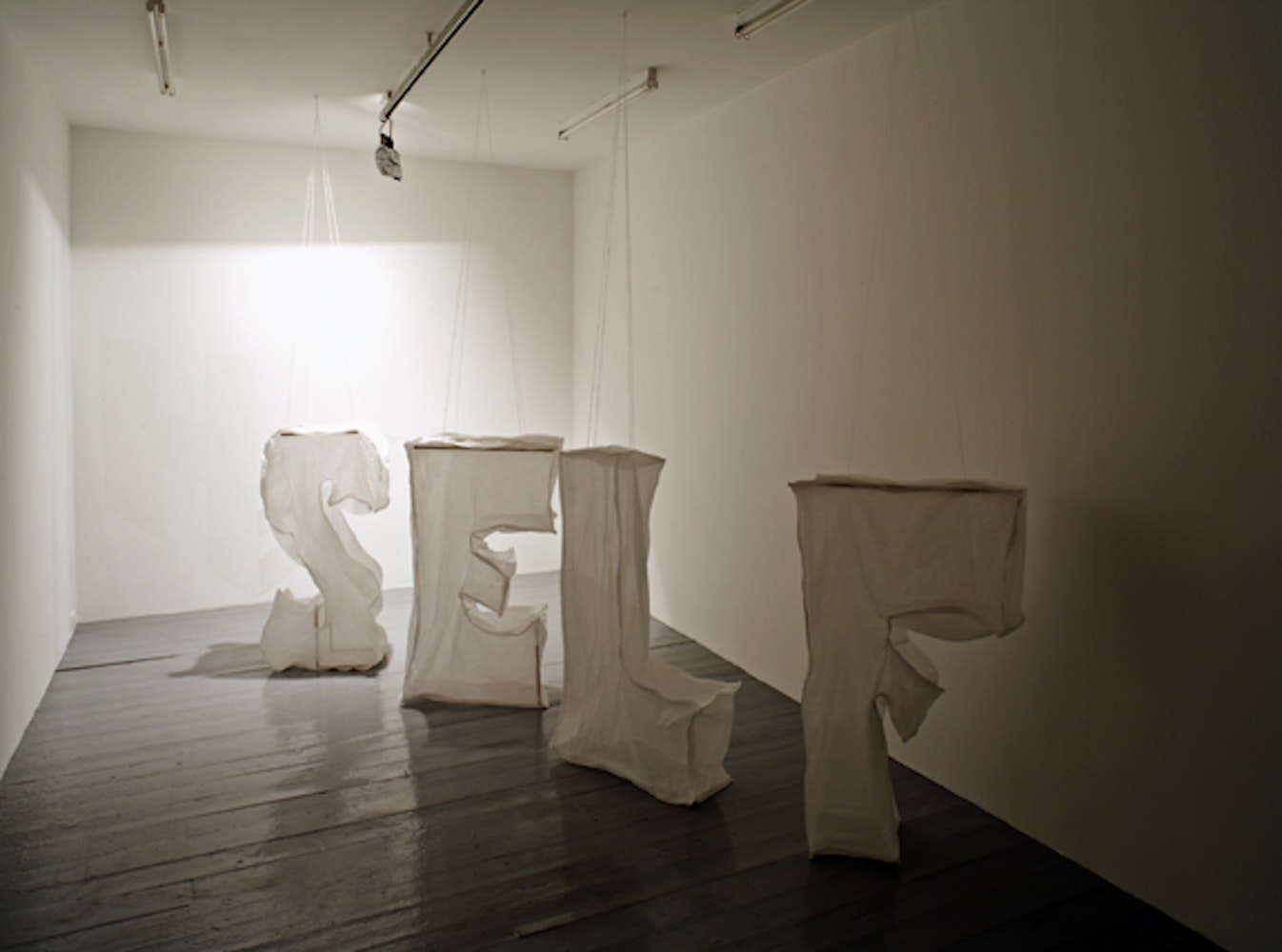