Kate Just’s new body of works Bombshell draws its name from the painted portraits of pin-up girls that adorned American cars, tanks, aircrafts — particularly bombers — and their artillery during the Second World War. A ‘bombshell’ is linked to the wartime idea that military machinery could embody women as objects of male desire, or that the two could be fantasised about interchangeably. Attendant with this mythologisation of the 1940s American woman, however, are a number of loaded connotations. One smacks of ardent sexism, by encouraging and propagating the hyper-sexualised depiction of women and simultaneously reconfiguring the female body as an avatar for destruction, while the other holds more progressive and specifically cultural implications — conjuring up images of ‘Rosie the Riveter’ and the entrance en masse of women into the workforce all across the United States in a variety of different industrial and non-industrial jobs.

The imagery associated with both incarnations — the voluptuous women painted onto the sides of machines, and the depictions of robust female workers in poster propaganda and news reels — is not dissimilar stylistically. Furthermore, the dual incarnations might also be understood metaphorically as representing two sides of the same coin: where the bombshell points to the distinct absence of women in the army, the ‘Rosie the Riveter’ icon was born out of the critical lack of men in the labour industry. This Janus-faced signifier of the idealised, 1940s American woman is typical of Just’s interest in mining the in herent duplicities underpinning the historical representations of women, whether these are archival or pop cultural; archetypal or stereotypical.

Though the Bombshell series is aligned conceptually with recurring themes in Just’s oeuvre, it diverges aesthetically from the work we typically associate with her. Just is known for her elaborate, biomorphic knitted sculptures that, along with many references to the natural world, address what the artist refers to as the universal ontology of femininity. In these sculptural works, Just tends to make a series of visual allusions to the female anatomy and to essentialist notions of womanhood. By exploring one half of such gendered binary pairings, the knitted sculptures (which are also often underscored by a number of autobiographical references) have led to Just’s work being understood within a feminist discursive framework — for art that is made by a woman, about women and executed in a medium traditionally associated with women can barely elude such an interpretative fate.

But, as we shall see, questions pertaining to feminism and identity politics constitute only one facet of Just’s core concerns. Perhaps more critically, Just’s work explores the interpretative currency of images in the visually over-saturated present day. Just examines the ways that varying and widespread image literacy can engender a fluidity of meaning for everyday symbols and signifiers.

In stark contrast to earlier, more immersive sculptural installations, Bombshell is a series of seven collages that is defined by its two-dimensionality. Yet like her sculptures, they are largely process-driven, with Just noting that typically her practice is as equally predicated upon investigations into chosen media, as it is a visual illustration of a concept a priori. With this in mind, the recurring images and symbols that are perpetually reconfigured in Just’s work — images that are particularly resonant with Jungian notions of archetypal shapes and symbols — make logical her seamless, itinerant shifting between sculpture, installation and collage. In this way, Bombshell is primarily grounded in a material investigation that pivots around the processes of gathering, isolating and arranging, and subsequently gives way in its final form to seven distinct and delicately sutured assemblies of both abstract and figurative photographic excerpts. Each of these assemblies represents, for Just, a portrait of a woman; and by using the technique of collage she aims to visualise a link between the construction of women in the history of their representation and the construction of machinery, by descrying the specific functions of their constituent parts.

The individual images within the seven collages are derived from a wide range of sources, though theynotably constitute an admixture of cut-outs from high-end fashion and interior design magazines juxtaposed with old issues of National Geographic and other wildlife journals. In Brenda (2009), for instance, a blonde ponytail latches onto a wicker coffee table to become a head, where in Juliet (2009), an arid desert intersects with a piece of polished wood to create a torso — commingling notions of the female with the domestic, and the ordered with the wild.

By employing the use of incongruent images that are not unfamiliar to the collage medium (consider their contemporary reverberations in Wangechi Mutu or Candice Breitz), Just appears to be drawing upon recognisable tropes of postcolonial and feminist photomontage to highlight the exaggerated depictions of the “other” — both female and ethnographic, respectively — in such popular media. Yet Just’s figures do not convey the same sense of political urgency as seen in these examples. Instead her collages aim to nullify (and even reverse, in some cases) the traditional male gaze. She achieves this by rendering her collaged female subjects eyeless or replacing their eyes with camera lenses or mirrors, thereby suggesting that what we should see when looking at the Bombshells is ourselves.

In all their iterations, female icons in Just’s work are drawn-up, contrasted and redesigned. Whilst the results of these visual processes call attention to the interstitial adaptations of meaning that underpin certain images, they also ask the viewer to acknowledge their own role in the creation (and recreation) of such definitions. 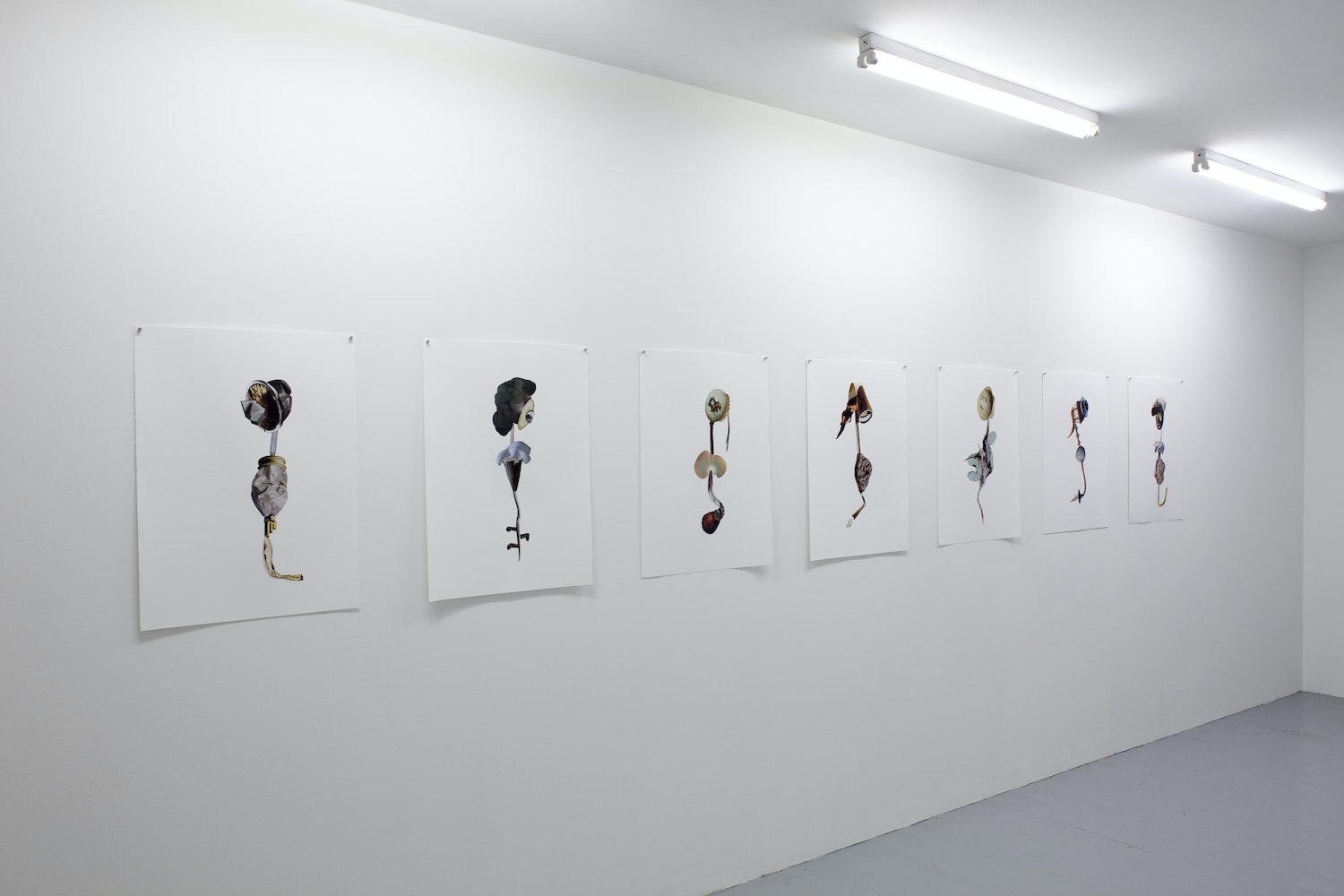 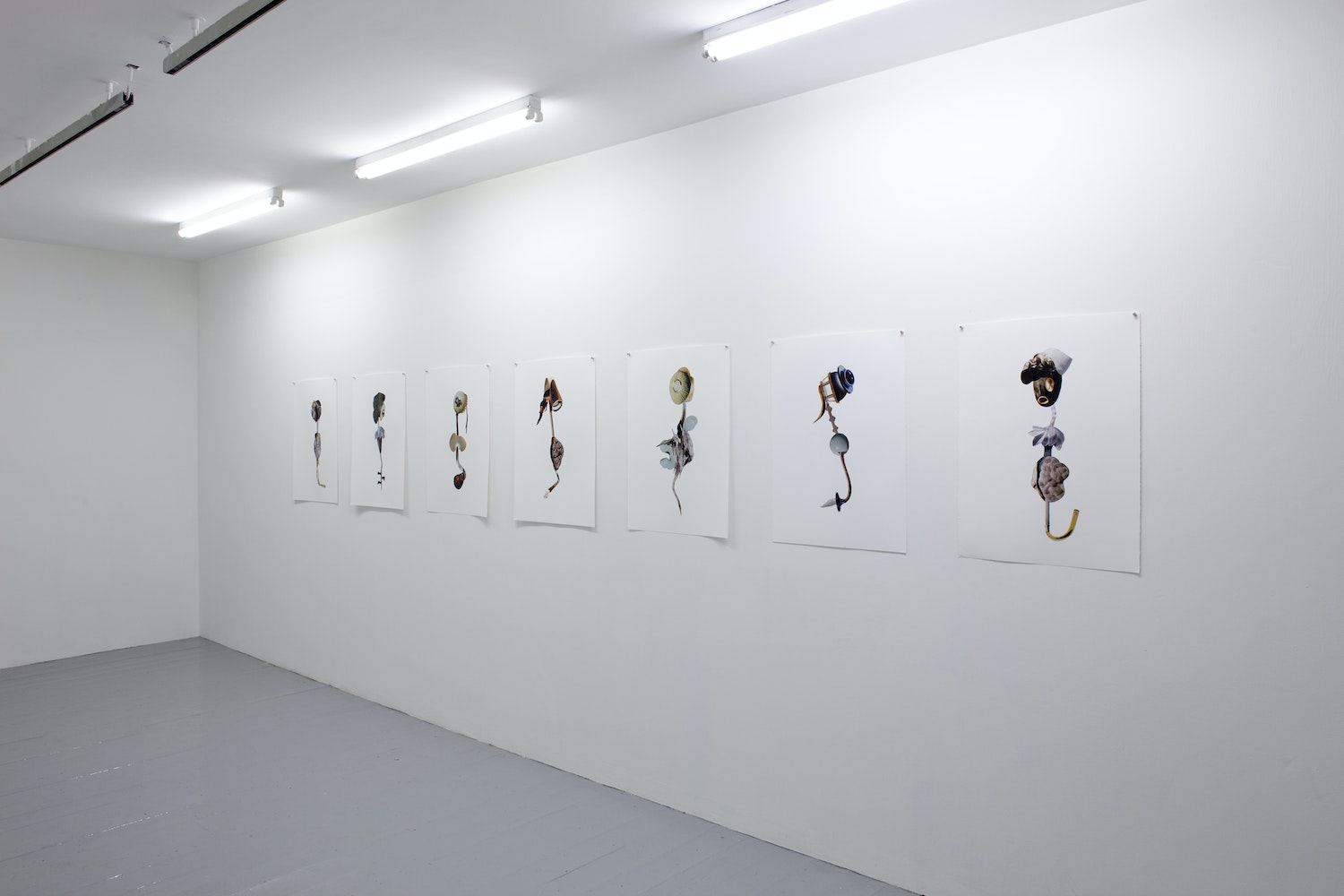