Installation view of Matthew Griffin, 'Gestures to Nowhere' at Studio 12

Griffin has long been interested in how underground stylings, emerging from the street up, can function as shorthand for a wider subset of ideas, both within the gallery and without. Playing upon the overt posturing of hip-hop, for instance, Griffin revels in how performative music styles give way to real-life events—from the dramatic gunning down of gangster rapper, Tupac, to individualized acts of fandom. Griffin’s works are heavily informed by the pop cultural practices that interest him; subjects that acknowledge his own investment as a fan. He looks to jokes that amuse him, indulging in an unabashed love of punning, the ridiculous and the farcical. His latest sculptural installation, Per Diem, becomes Carpe Diem or Crap Diem, depending on your mode of interpretation, the title is “Latin… classy… [so] I like it”, quips Griffin. In his eclectic and idiosyncratic approach boundaries between the real and the fictive, and art and life are considered precarious, at best.

As with the large wall drawings for which he is most well known, there is an architectonic dimension to Griffin’s work that elicits a strong spatial and experiential mode of engagement. Achieved in hand-cut adhesive vinyl (an easily removable material that, in itself, taps into the transience of his aesthetic), his line drawings generate highly physical effects as we orient our bodies to their sheer scale. Such a charged physicality is typical of Griffin’s work. This remains the case with Per Diem, where two billiard balls are suspended from the ceiling of Studio 12; held in place by lines of fishing wire, coated in multi-coloured gobs of chewing gum.

The visual juxtaposition between the implied weight of the billiard balls and the doubtful strength of tensile strings of gum lends a pensive atmosphere to the piece, which seems on the verge of breaking apart. Beneath the impending gravitational pull of Per Diem is a black garbage bag, where a swirl of excreta forms a shape vaguely reminiscent of a dollar sign. The combination of bag, crap, gum and dollar sign riffs on the punning of the work’s title (as monetary dues for labor or processes of ingestion and consumption as well as expulsion) but Per Diem and, indeed, Griffin give nothing away. As an artist, he prefers to meld the dynamics of the exhibition space with the succession of meanings that his work might prompt in its viewer. It is as if Studio 12 had spontaneously digested Per Diem; as if we had stumbled across an itinerant, squat or vagrant space and happened upon the work, in its own unique process of becoming.

What fascinates about Griffin is how his interest in overly-used gestures can still engage the viewer, generating a multiplicity of meanings. In its deliberate pointing out of the obvious, his art recalls the rhetorical function of deixis as a kind of gestural pointing. Deixis is a face-to-face form of communication where “to show forth, point, display, bring to light, exhibit, reveal [and] greet by means of word and form” reigns supreme. Griffin’s deictic gestures allude to a series of instantly recognizable tropes, themes and icons within pop culture and art but he re-activates them in highly unusual situations. These are gestures to nowhere in particular, allowing meaning to proliferate freely. If Griffin points us to found objects (a china dolphin, steadily deflating balloons) that border on the naff and the kitsch, these are matched to the detailed or labor-intensive ‘art’ of craft. Such aesthetic and affective tensions lie at the core of his practice, invoking a heightened ambiguity of interpretation. We might laugh at effects that have so obviously been used before (simulated turds or Archimboldo-esque assemblages of meat and fruit) or be fascinated by the weird beauty of Griffin’s art, or experience an almost visceral unease at his organic ooze of text and imagery, which hints at the melancholic dissolve of time. Griffin’s gestural works appeal not just to our vision but to our entire bodily bearing, to blood and guts, spit and bowel and the thoughts that emerge from our innermost feeling flesh, with all the vulnerability that entails. 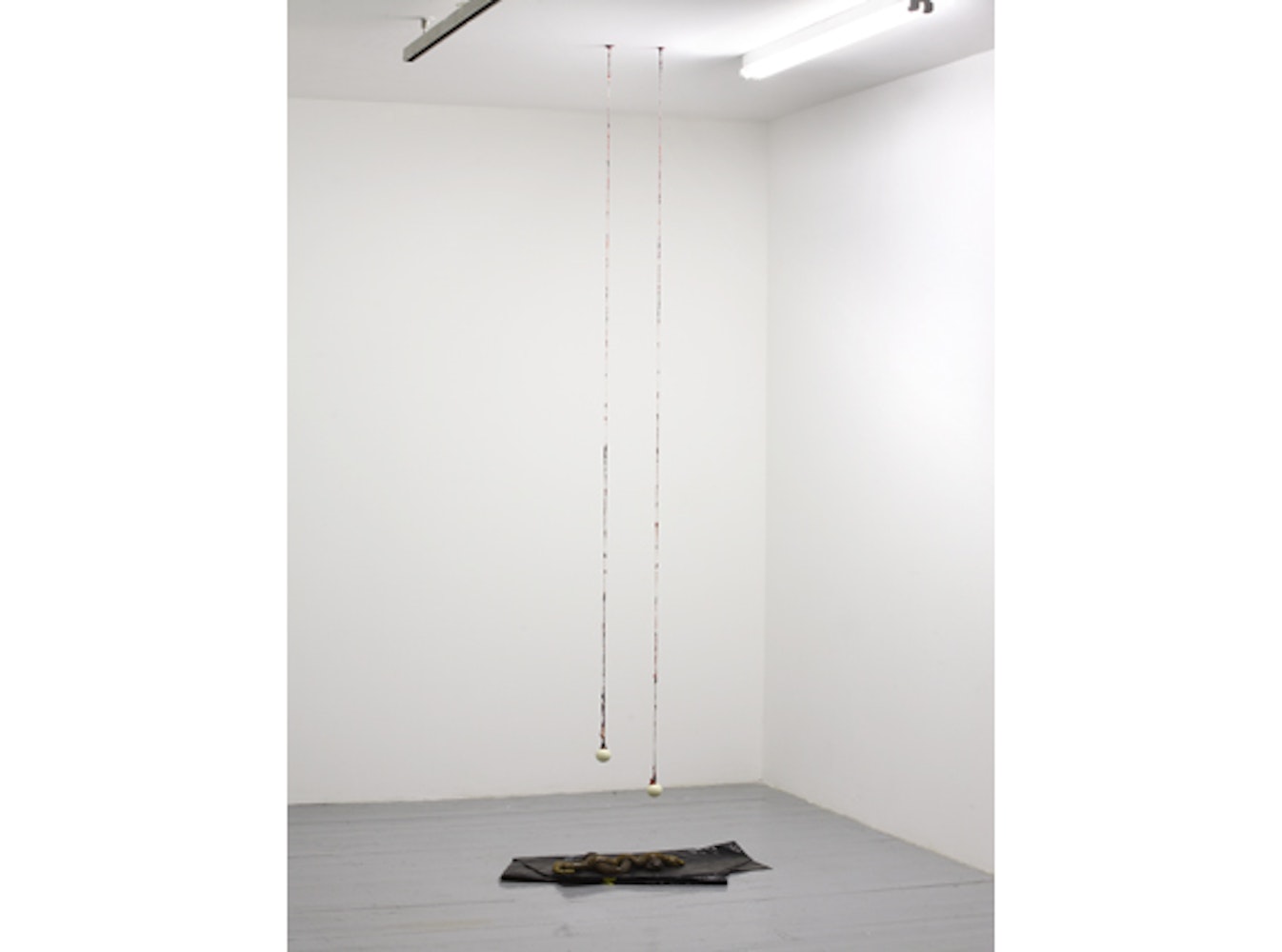 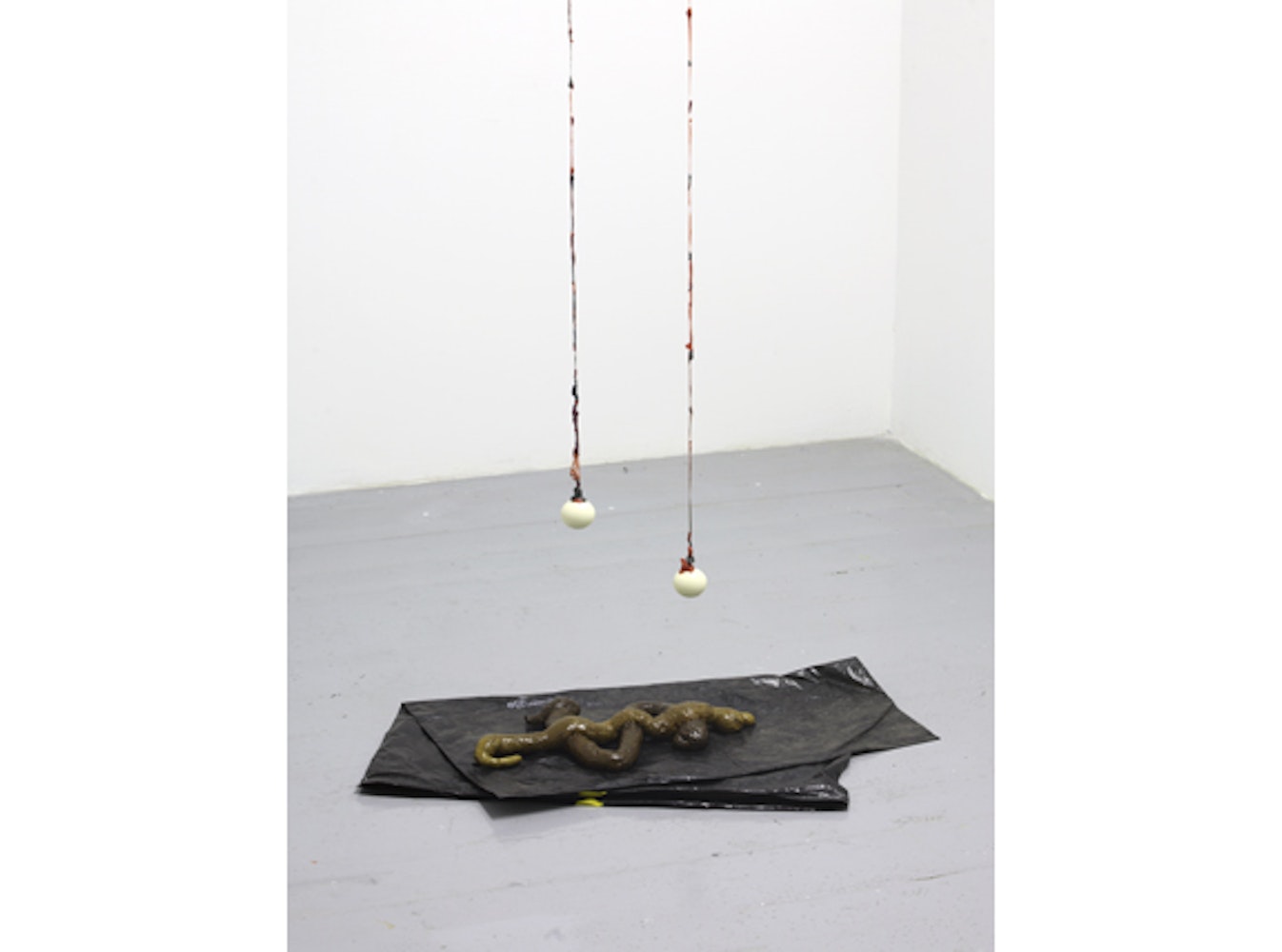