Love and Babies or Landscape of the Planet Tralfamadore

Installation view of Noël Skryzypczak, 'Love and Babies or Landscape of the Planet Tralfamadore' at Studio 12

INTO THE FOURTH DIMENSION

For her GCAS Studio 12 project, Noël Skrzypczak adds a new dimension in her visual art practice. Extending her painting prose into the sculptural, Skrzypczak’s latest work continues her recent explorations into the multidimensional.

Skrzypczak’s paintings have always been, in a sense, sculptural. In an attempt to break the illusion of paintings being like windows into another world, Skrzypczak’s work continually attempts to free itself from the uniformly rectangular canvas. Using abstraction, either alone, or combined with the recognisable; odd-shaped canvases or no canvases at all, she paints with a constellation of different colours that simultaneously combine, meld, gravitate and levitate, so that her paintings act like the visible residues of an otherworldly realm existing beyond the human level of perception.

Like traces of auric bodies, Skrzypczak’s work seems to tune into other frequencies, picking up radiations of the emotive, the relative and the surreal. Her paintings are inducements to the experiential—inviting contact with palpable drops of the metaphysical. Perhaps the paintings could appropriately be called ‘space invaders’ for their shambolic and unreserved occupations of space, their ostensibly extraterrestrial presence. Yet, despite these benign confrontations with the foreign and the mystical, the works remain essentially human, having a persuasive ability to stimulate contemplation into the very real world of the intangible.

Love and Babies or Landscape of the Planet Tralfamadore runs in the same vein. Oscillating between the corporeal and the ethereal, Skrzypczak’s sculptural installation is another experimental foray into rendering the multiplicities of the invisible into the physical.

Love and Babies or Landscape of the Planet Tralfamadore is inspired by the book Slaughterhouse 5 by Kurt Vonnegut. A tale of the bombing of Dresden, the book contains a subplot in which protagonist Billy Pilgrim is abducted by aliens from the planet Tralfamadore. He is exhibited naked in a Tralfamadorian zoo and is later joined by kidnapped porn star Montana Wildhack, who is equally naked, save for a locket containing a picture of her mother around her neck. He later mates with her and impregnates her and, several years later back on earth, remembers her on the planet Tralfamadore, taking care of their baby.

Skrzypczak intuitively sculpts a partial landscape of Tralfamadore in which this mating took place, using various gradients of magenta that sensuously unfold and mushroom on Studio 12’s floor. Through installing a light within the landscape’s voluptuous swells and contusions in the darkened room, Love and Babies or Landscape of the Planet Tralfamadore can be seen to evoke a sense that life forms are incubating within its interior, transforming the sculpture into a protoplasmic sheath protecting its simmering progenies. In this way the delicate biomorphic quality resonates with the very organic and enigmatic processes in which babies are created, while its lush colouring and wide span seem to embody a mother’s, or a lover’s, embrace. Love and Babies or Landscape of Tralfamadore does not simply suggest an alien terrain, but describes the very mystifying and phenomenal astral ambit of love and babies.

Slaughterhouse 5 describes the Tralfamadorians as being able to see in the fourthdimension, and find humans’ limited 3D vision limiting in the extreme. It is precisely a fourth dimension that Skrzypczak essentially brings to her works. Through employing materials that appear to escape from their confines Skrzypczak incites the viewer to realise the presence of the extrasensory spectrum in which experience and emotions lie, and ultimately inviting the viewer to see into another dimension
and beyond the 3D. 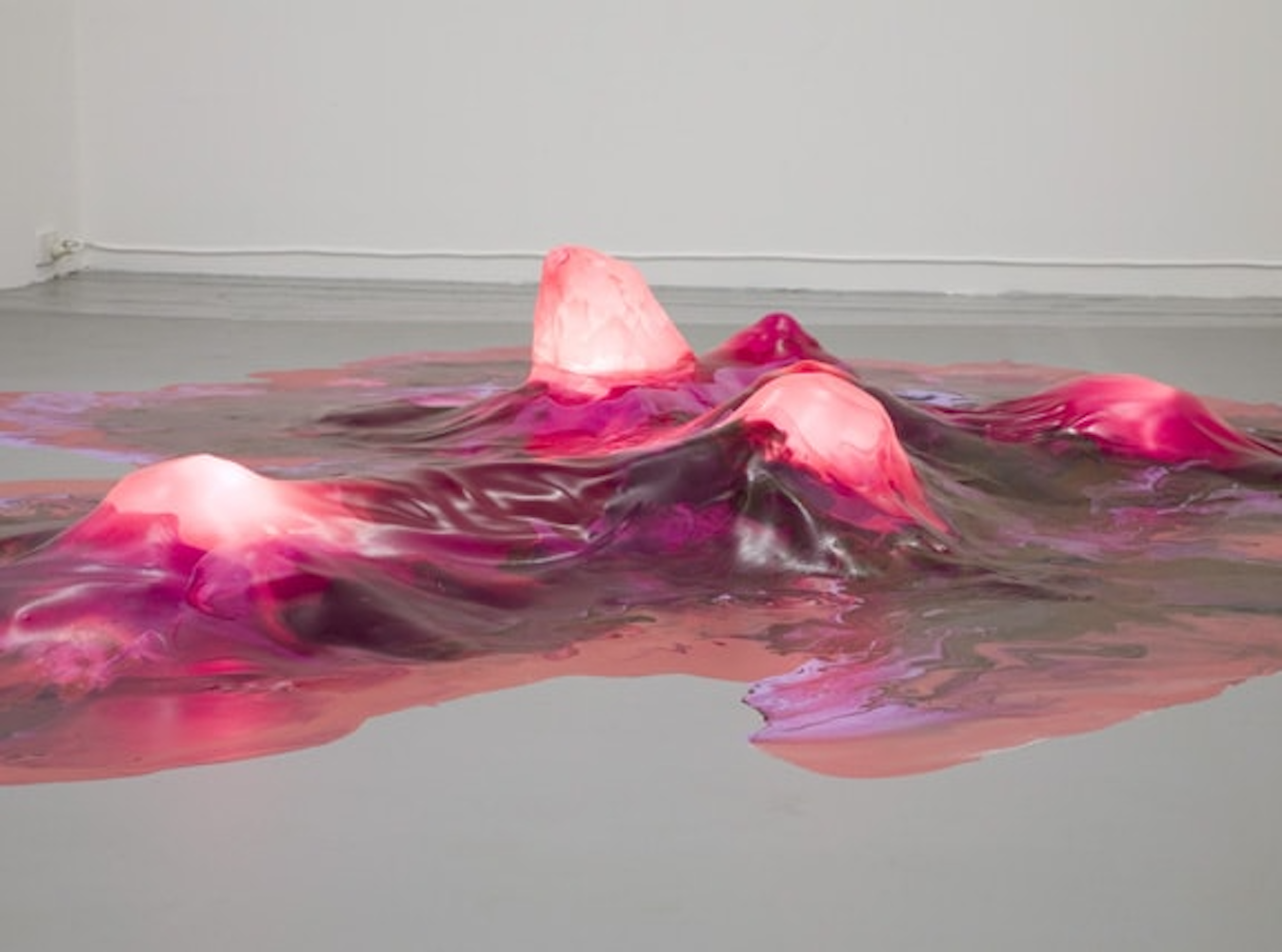 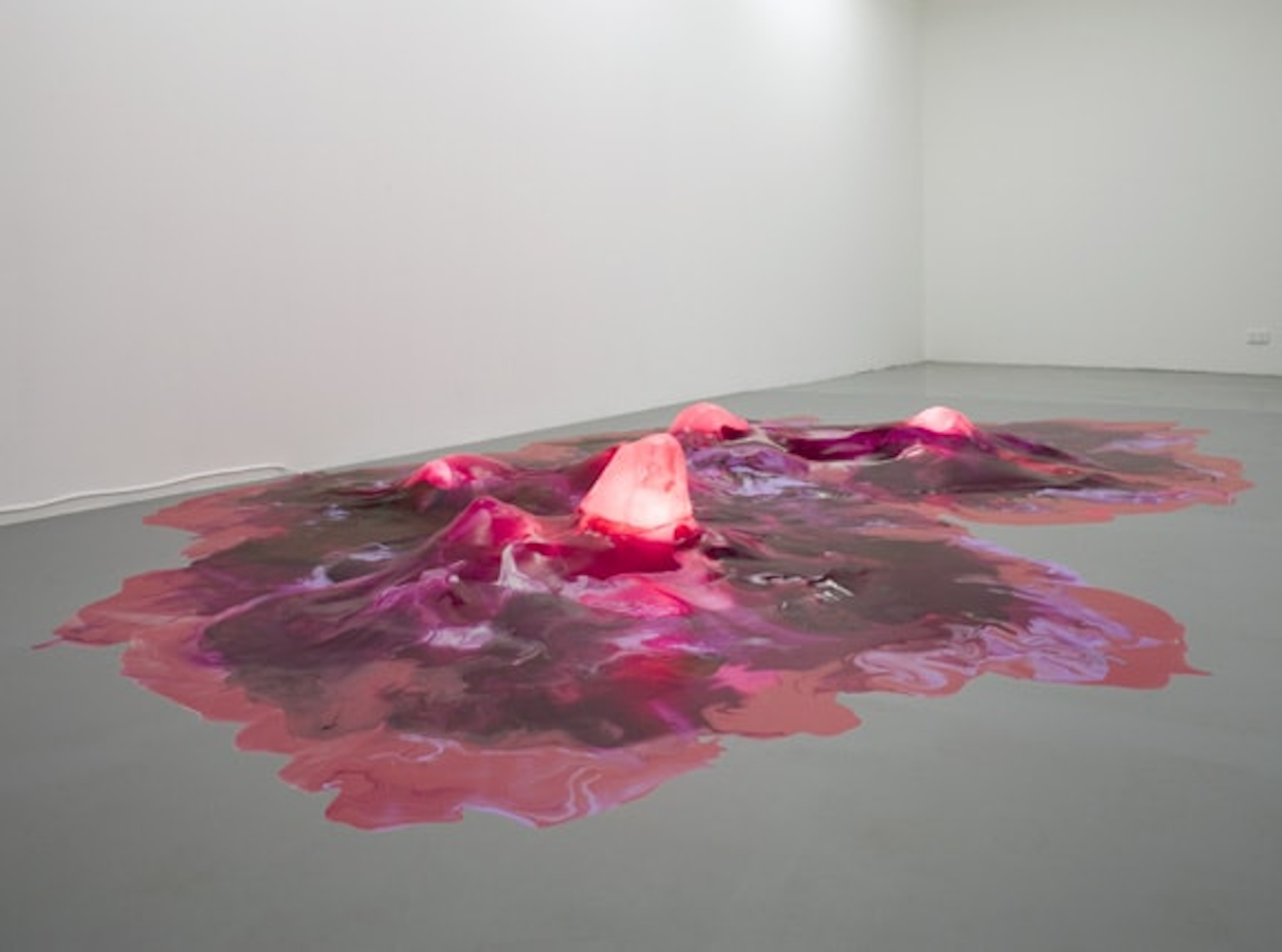