Dying in Spite of the Miraculous, 2010, installation at Gertrude Contemporary. Photo: Christian Capurro.

Featuring work by seven major international artists, Dying in Spite of the Miraculous revealed the shadowy outlines that bleed between worlds, where artists become inseparable from their haunting of a site or a story. Co-curated by the Melbourne Festival and Gertrude Contemporary, the exhibition explored film’s potential as an allegory for the interplay between real time and the illusory, as actors blur their characters with themselves, and sites resonate with accumulated history.

Combining the intrigue of real life events born from trauma and psychosis with ritual and magic, Dying in Spite of the Miraculous presented a restless fusion of the celestial and the real. Bas Jan Ader and Jeremy Blake both disappeared, presumed drowned, while exploring sadness and psychosis in their work. The myths and superstitions surrounding occultist Aleister Crowley and killers Jean-Claude Romand and Charles Manson are the subject of works by Joachim Koester, Saskia Olde Wolbers and Justin Lieberman. Joachim Koester and Ulla von Brandenburg investigated a curious collection of architectures, from the ghoulishly muraled rooms of Crowley’s magical community in Sicily, to Le Corbusier’s failed utopian experiment Villa Savoye.

Jeremy Blake’s video work summons the spectres of the Winchester Mystery Mansion built by Sarah Lockwood Pardee, as a gift to the ghost that haunted her. In all of these works the celestial coexists with the out-take and the certain becomes ethereal.

Working in collaboration with architect Johan van Schaik of Minfie van Schaik Architects, Gertrude Contemporary’s two gallery spaces were transformed into dematerialising labyrinths, mirroring the way the works blur the distinction between self and subject.

Bas Jan Ader (1942 – 1975, Netherlands) is an influential conceptual artist whose films, photographs and performances have attracted significant attention in recent years, despite his tragic early death. He first studied at Rietveld Academy in Holland, before moving to Los Angeles where he undertook a BFA and an MFA, along with studies in philosophy. As a peer of Baldessari and Gordon Matta Clark, he employed the clean objectivity of conceptual art to explore experiences that are definitively subjective, including the emotional intensity of tragedy and the romantic quest for the sublime. In 1975 Ader embarked on what he called ‘a very long sailing trip.’ The voyage that was to be the middle part of a triptych called In Search of the Miraculous represented the absolute confluence of art and life. This journey involved Ader undertaking a daring attempt to cross the Atlantic in a 12½-foot sailboat. Six months after his departure, his boat was found, half-submerged off the coast of Ireland, but Bas Jan Ader had vanished.

Jeremy Blake (1971 – 2007, Oklahoma, USA) is highly acclaimed for his pioneering combination of painterly techniques and traditions with digital media. Blake’s hybrid film/painting works have been described as ‘moving paintings’, incorporating both abstract and representational imagery that employ the visual language of both Modernist abstraction and Film Noir. Employing his distinctively heavy aesthetic quality, Blake’s work addresses a range of subjects from violence and terrorism to glamour and decadence, from metaphors of architecture to clichés of cultural personifications. Described as a narrative abstractionist, Blake’s work embraces history, pop culture, biography and fiction in ways that are seductive, provocative and profound. Despite his successes Blake was plagued by personal difficulties, and tragically went missing on 17th July 2007 at Rockaway Beach in Queens, N.Y Police believe Blake, 35, committed suicide by drowning himself. The suspected drowning took place one week after Blake’s long- term partner - filmmaker Theresa Duncan, 40 - had committed suicide in their apartment. The reasons for the couples’ deaths remain, to this day, open to conjecture.

Joachim Koester (b.1962, Denmark. Lives and works in New York City, USA) is a conceptual artist who employs the relics of forgotten or obscure moments in history or culture as raw material in his films and photographs. With his work characterized as being “along the borders between documentary and fiction”, Koester ‘ghosts’ poignant sites such as Alesister Crowley’s home in Cefalu or the Canadian Arctic town of Resolute, peeling back and exposing the accumulated layers of history and mythology that settle over these locations. Typically he begins with an obscure story bound up with a particular place, a sited tale that is somehow broken or layered through time. Often employing a photo sequence or a film installation, and supported by rigorous research, his projects comprise of visual environments that give voice to the multiple occupants and narratives from throughout history, bringing them together in a non-linear haunting of the site.

Justin Lieberman (b.1977, Miami USA. Lives and works in New York City, USA) uses text in his works to recontextualise, subvert, critique and even celebrate the smothering forces of celebrity culture and the mass media. Working across sculpture, collage and assemblage, Lieberman manifest his own neuroses, obsessions, and humour enmeshing it within the language of advertising thereby providing insights into our conscious and unconscious immersion in the media. Lieberman uses text as a form of visual defacement, similar to graffiti, where words redirect the original image’s intentions and bring to light any repressed or sublimated sub texts that reside within the image. He also injects an element of the personal into his appropriations by borrowing slogans and images from products he himself uses as a consumer. Lieberman’s works have been described as “little clips of his tumultuously sincere and emotionally disorganized radical interior world”.

Mel O’Callaghan (b. 1975, Sydney. Lives and works in Paris, France) works in a variety of mediums including film, video, photography and sculptural installations. Her filmic and sculptural tableaus resonate with a moving psychological poetry and have been described as “characterised by an attention to detail and ruthlessness in extracting the superfluous to articulate the covert mechanics and poetics of the world.” O’Callaghan often refers to mythology in her work employing stories such as The Myth Of Sisyphus to better describe the inevitability of both hope and disappointment in life. Employing analogy and metaphor the characters in O’Callaghan’s films become players in a narrative tussle between futility and the persistence of human will.

Saskia Olde Wolbers (b.1971, Netherlands. Lives and works in London, UK) combines an attention to the architecture of imagination with a particular ability to visualize emotional turbulence. Often taking the inspiration for her stories from actual news articles, television documentaries, and urban legends, each of Saskia Olde Wolbers films narrate fictional biographies into complex backgrounds of global politics, neuroses, and contemporary mythology. Olde Wolbers’ soundtracks are eerily divergent from her visual vocabulary. Whilst the sound track is presented in the style of media reportage or the retelling of an actual event, the visual focus is comprised of fantastic landscapes or strange interior spaces, some of which are painstakingly hand-crafted sets, manipulated in various ways to offer a redefinition of boundaries between film, sculpture, installation and painting.

Ulla von Brandenburg (b.1974, Germany. Lives and works in Paris, France) works in a diverse range of media to create complex, multi-layered narratives that investigate the thresholds that exist between reality and artifice. Working with film, painting, installation and performance, von Brandenburg creates tableau that appropriate historical source material so that it tacitly reveals the rules that continue to govern our social reality. Permeated by reoccurring themes and images sourced from literature, expressionist theatre, early cinema, and pre-Freudian psychoanalysis, von Brandenburg’s practice, cross-references back and forth between media creating a language that loops back on itself - endlessly repeating and developing. Concerned with the ‘borders of different consciousness: past and present, alive and dead, real and illusionary’, von Brandenburg creates work positioned uncertainly at the point at which reality ends and the illusion of life, emotions and events begins. 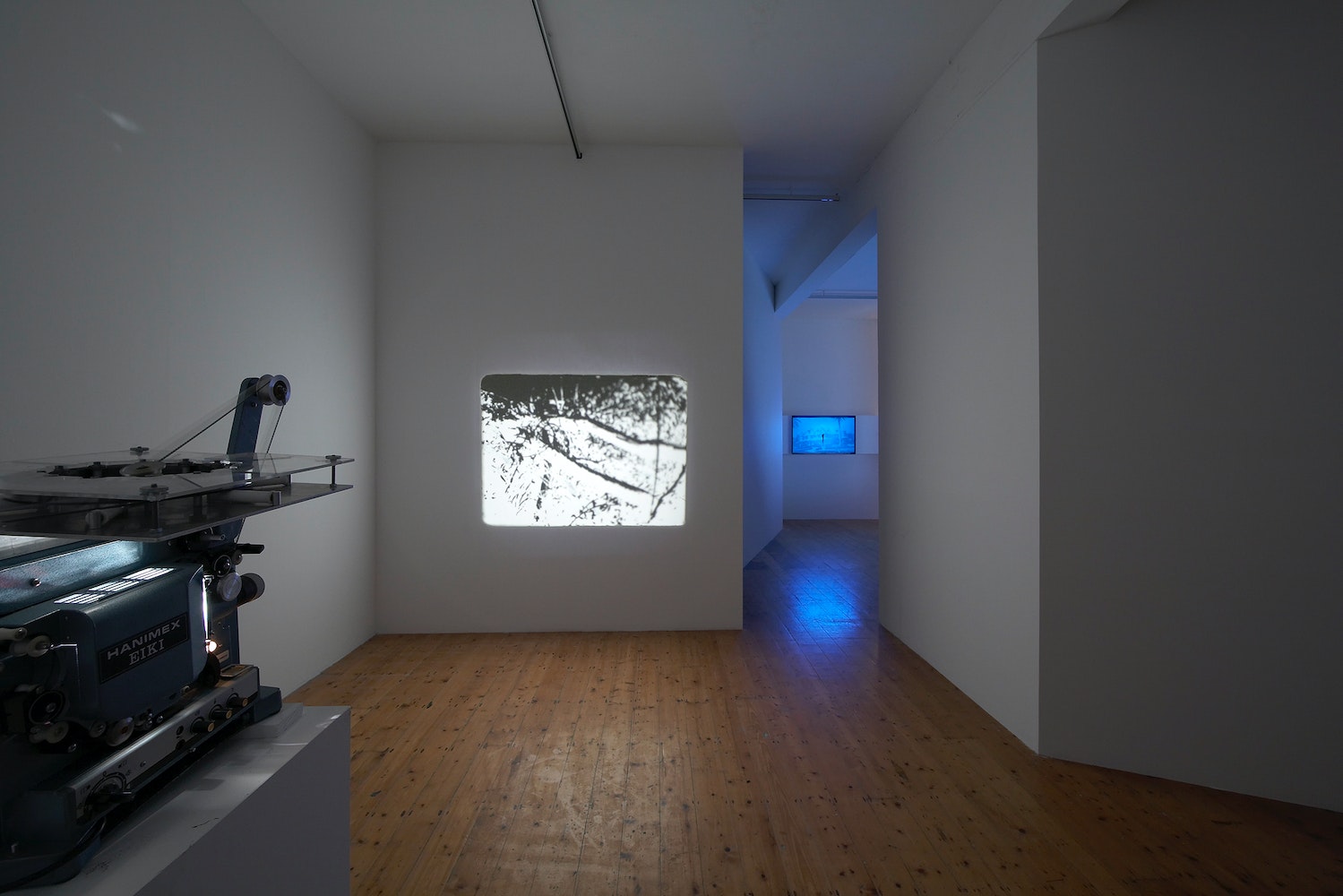 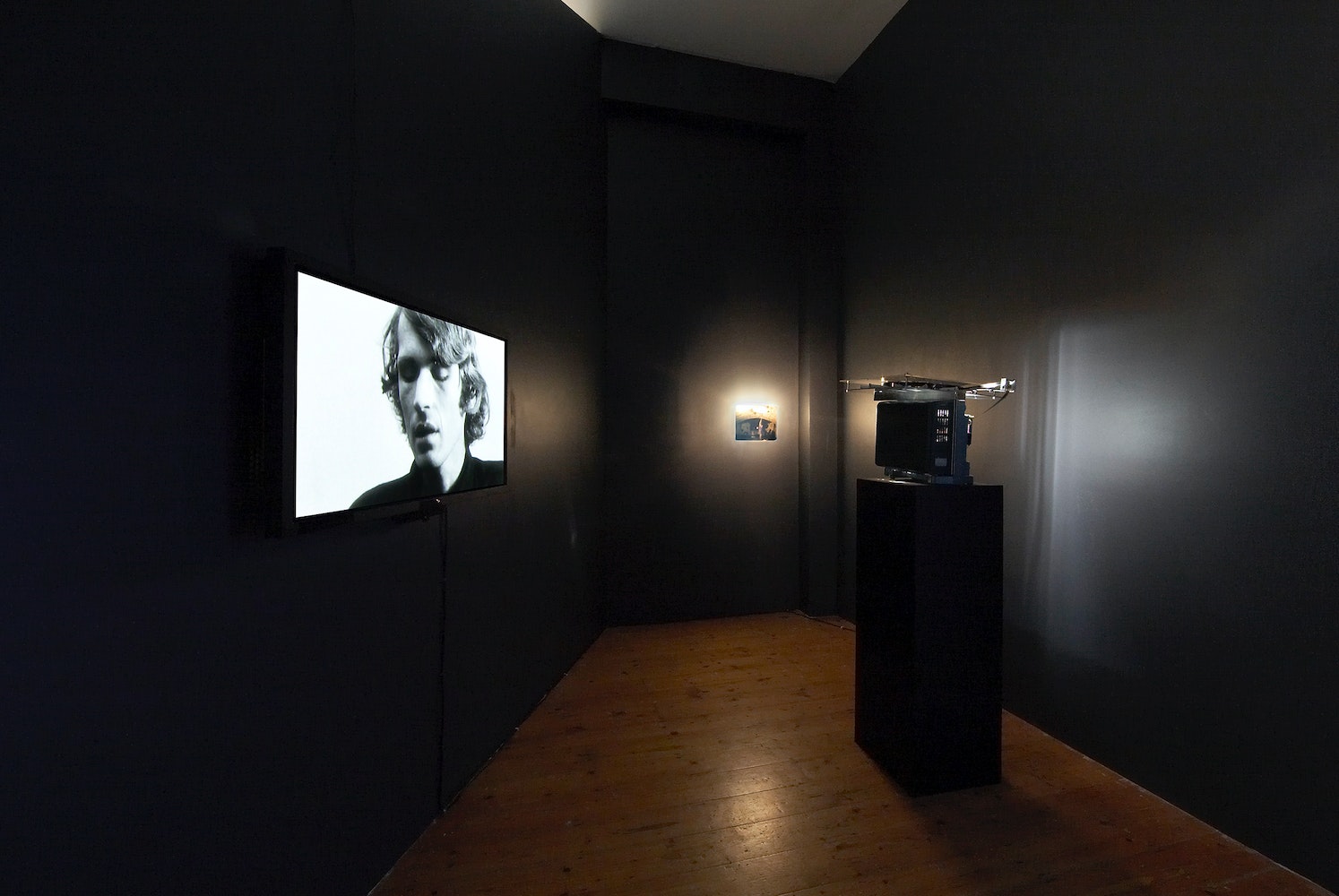 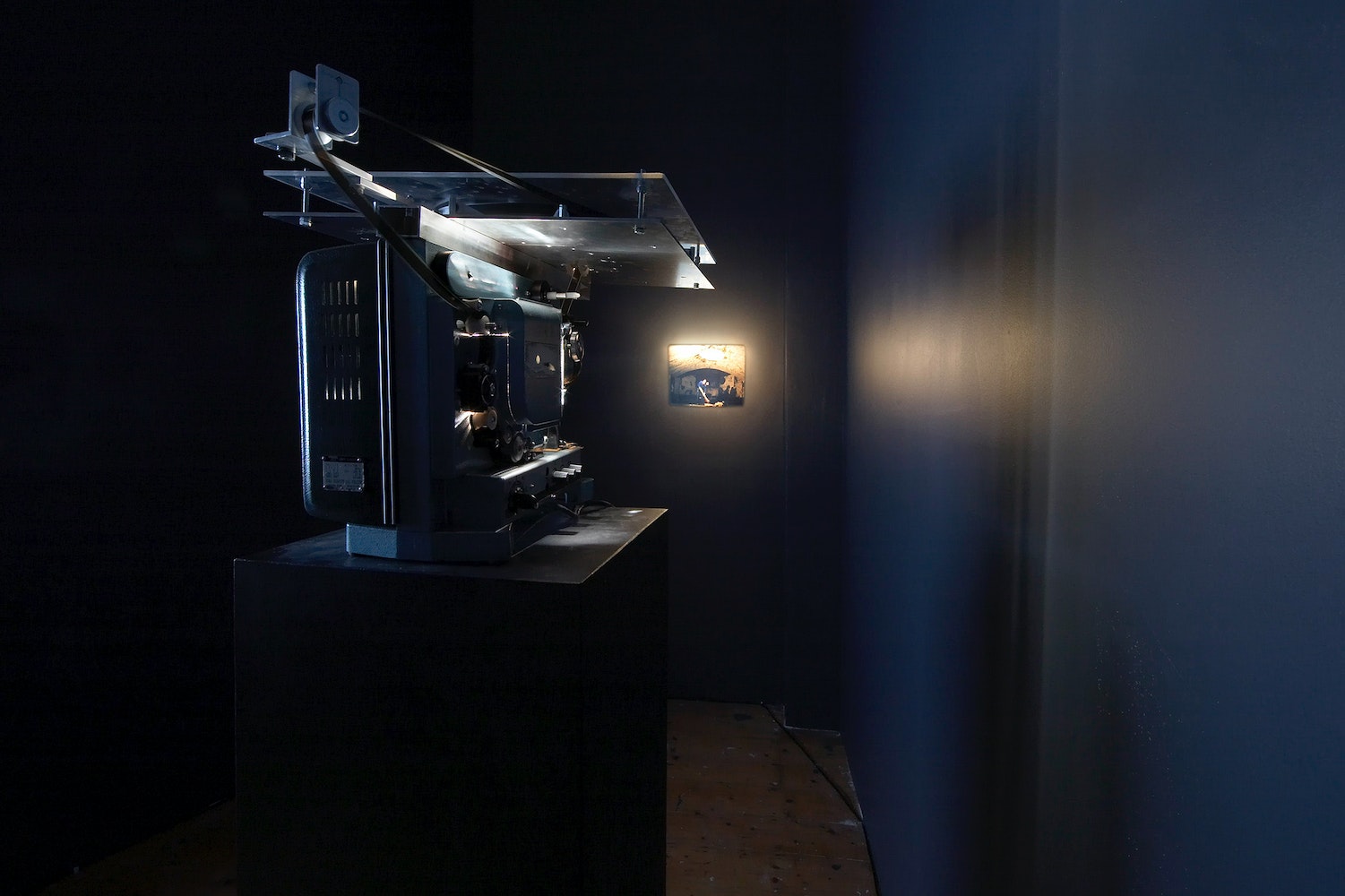 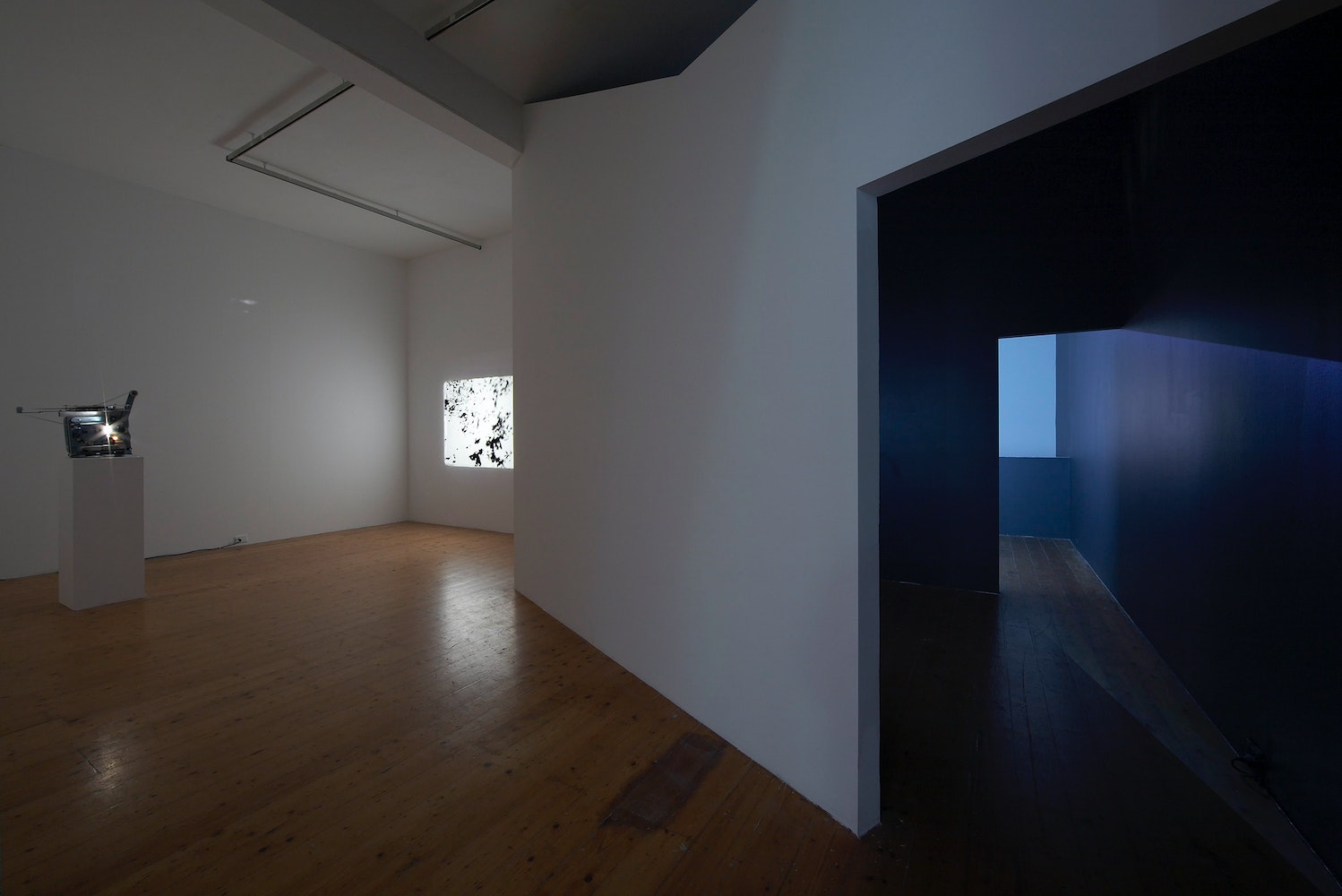 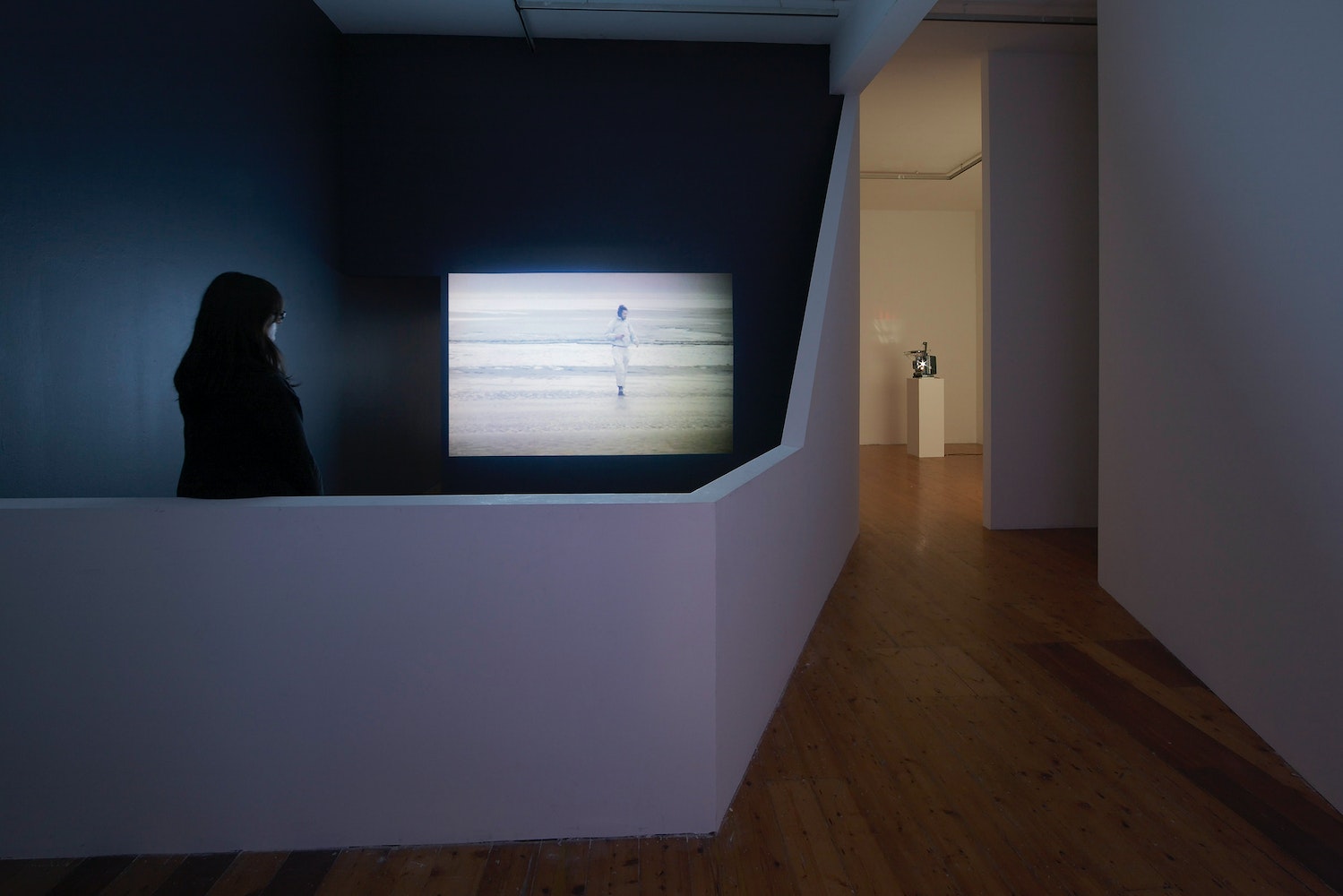 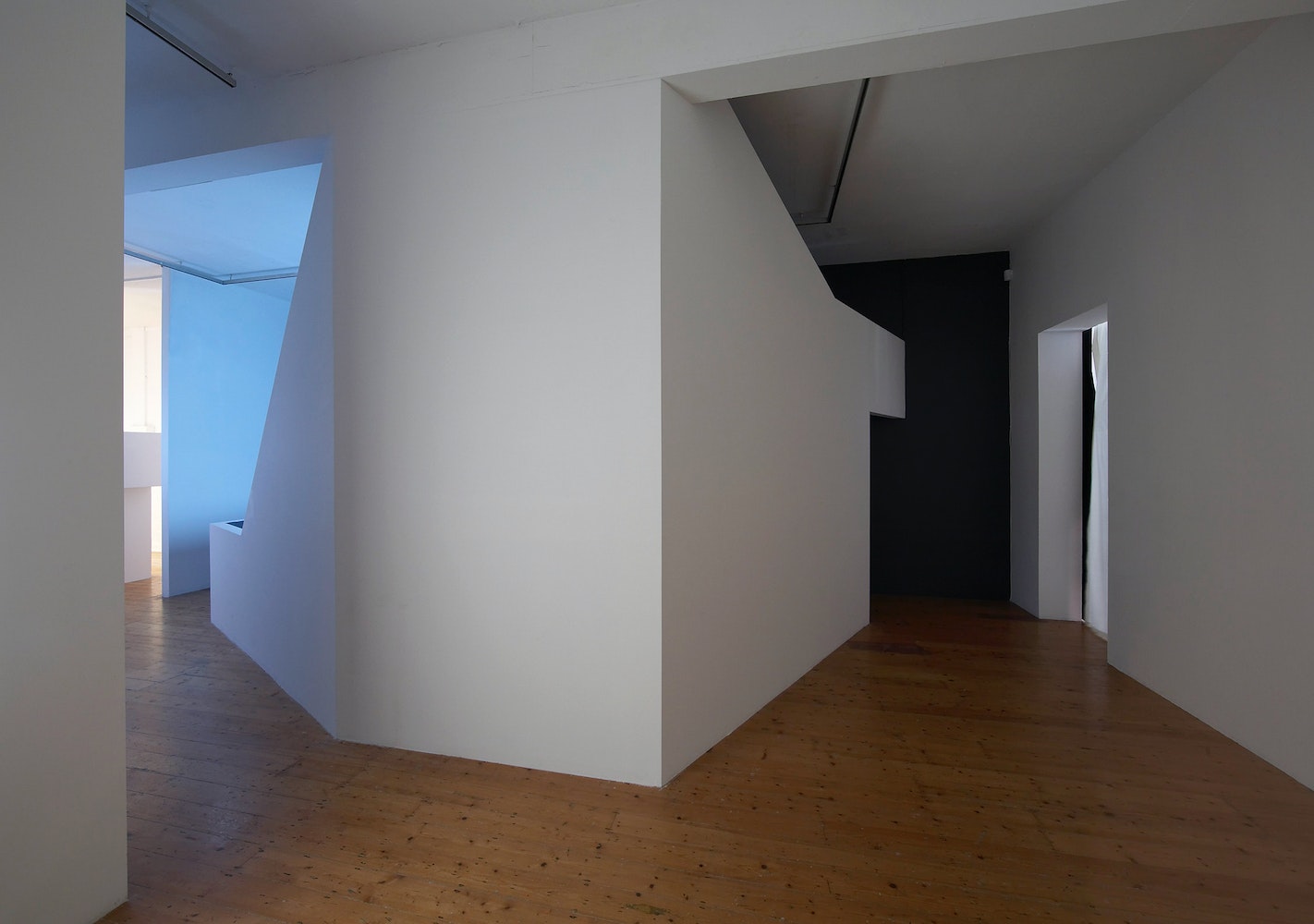 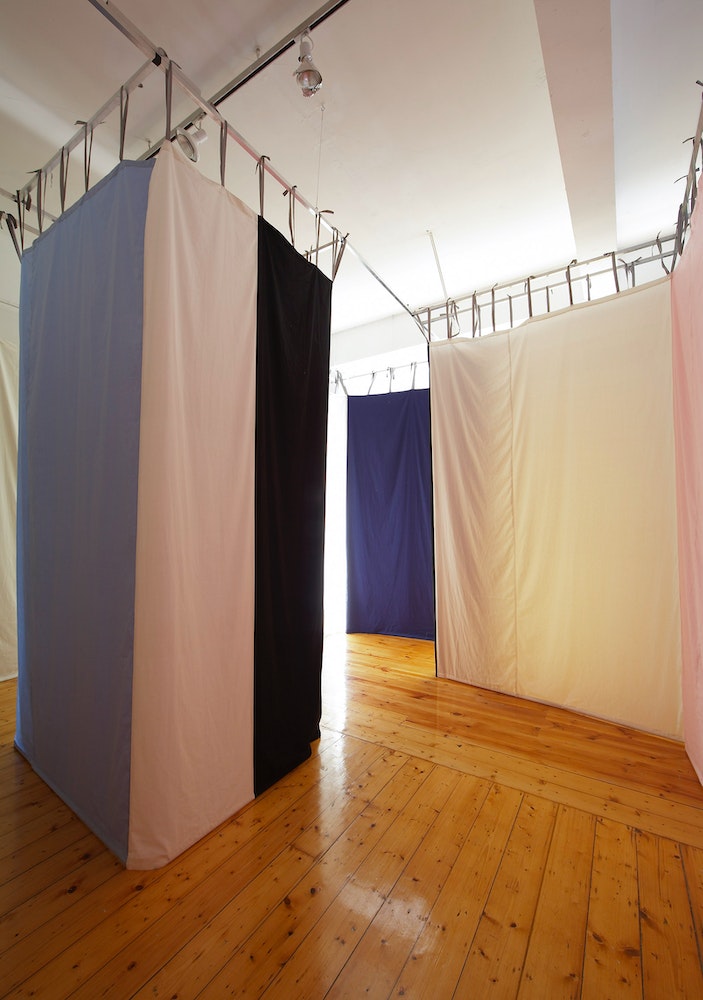 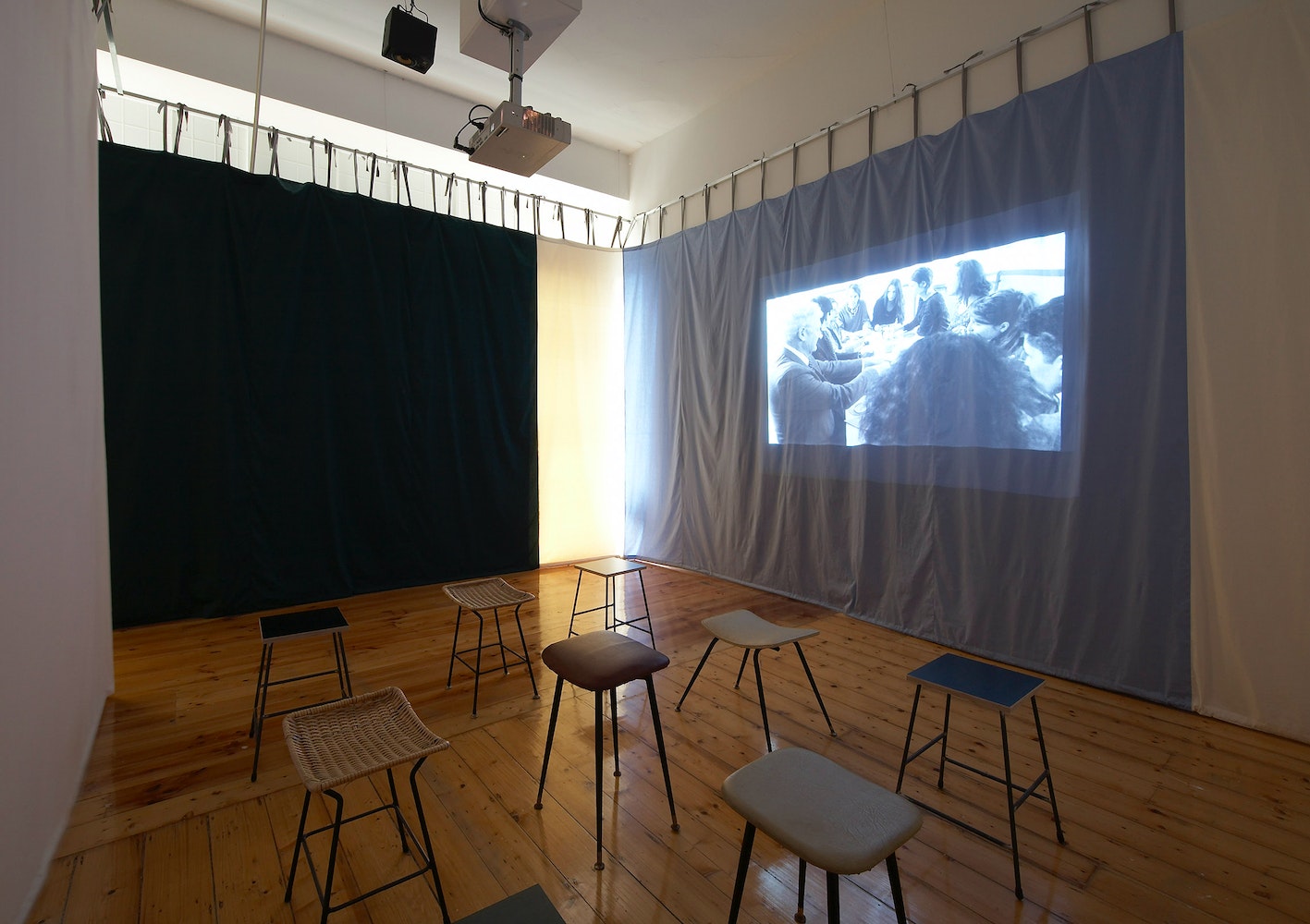 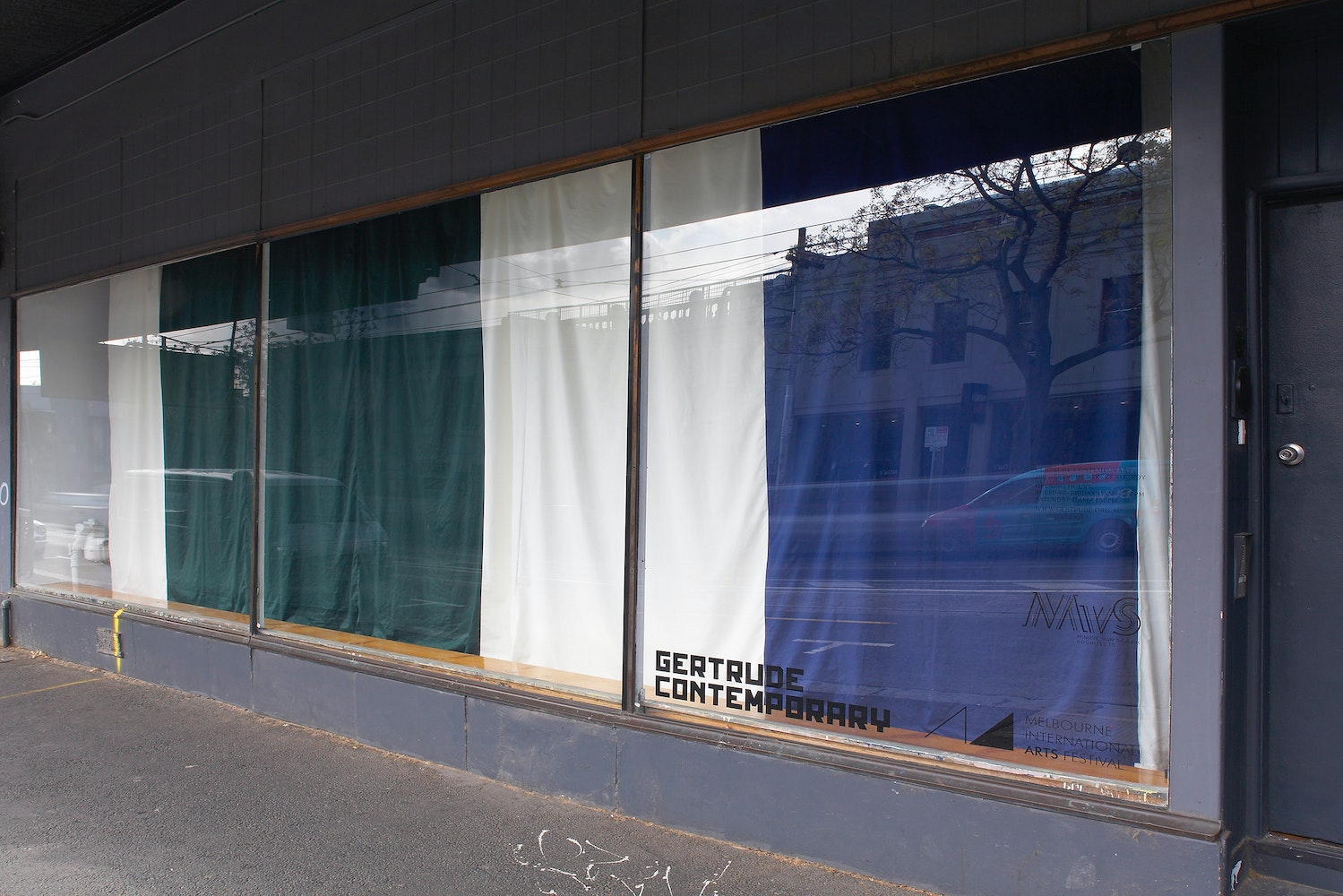 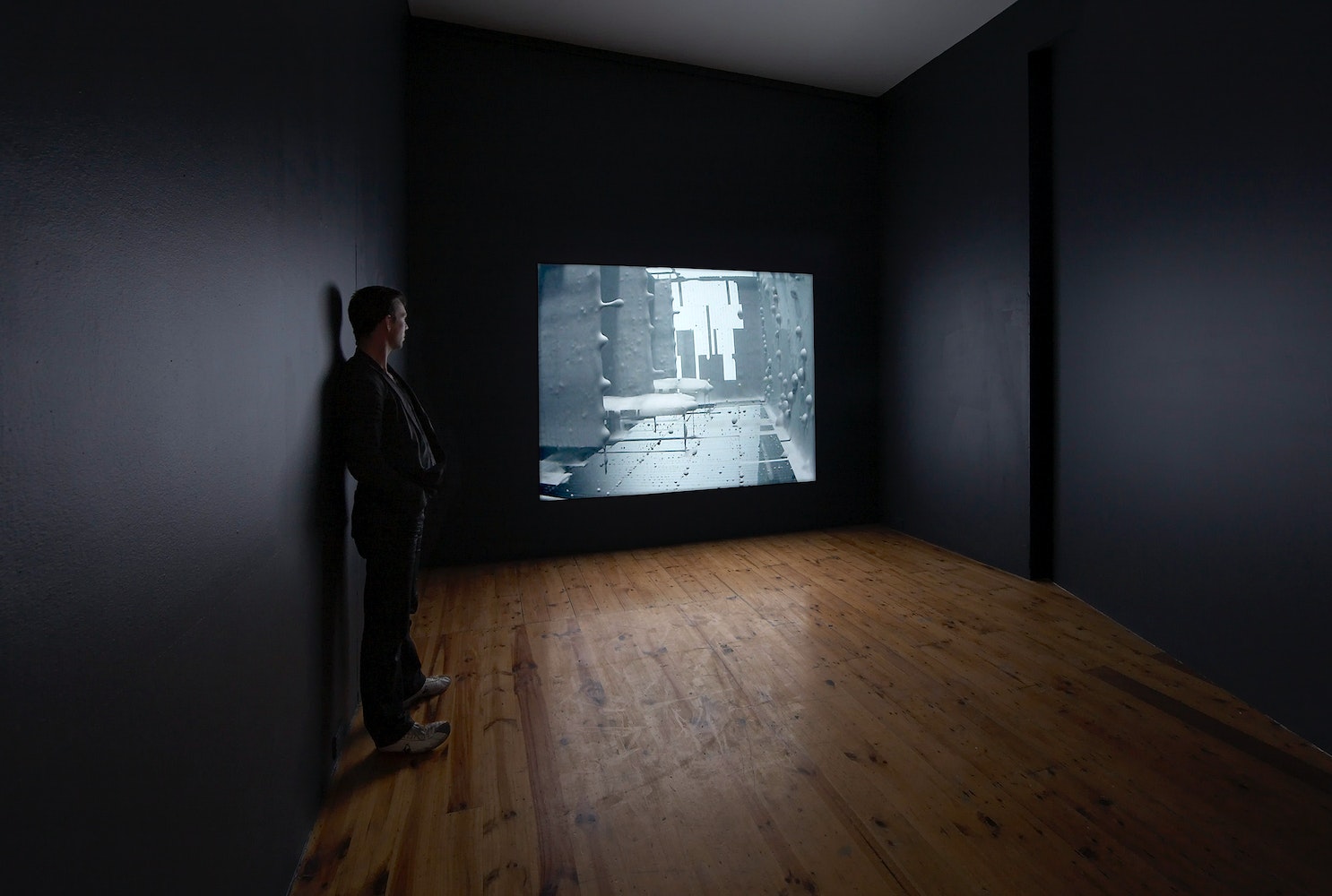 Presented in partnership with the Melbourne International Arts Festival.